skip to main | skip to sidebar

My place to show my fun stuff. I mainly scrapbook, but cards are starting to empty out my scraps!

Wanna win $450 worth of stamping goodies? Click HERE to see how. It is for an awesome cause. I keep seeing everyone entering, so I decided that I would too. I have been making up some fun ones to send also. My official entry is below. The pic doesn't do it justice. I was trying to use my cell phone to take the pic, cuz my camera was somewhere???? The PP are Paper Loft. The button was from Sticko Button-ups. I am not sure where the star is from, but I used some alcohol inks on it. The cute little penguin was a freebie I got one time. He is soo cute! 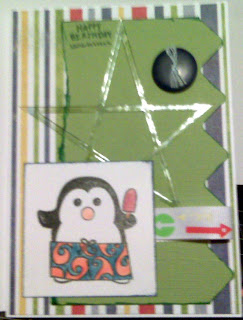 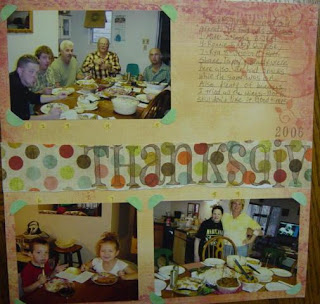 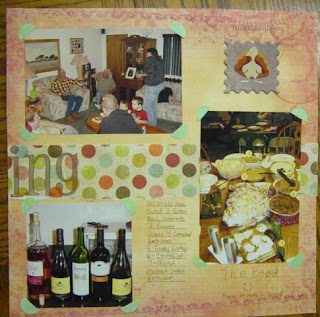 I started out with Fancy Pants, Floral Chic pp for the background. The cute polka dot paper is from Shabby Princess, a kit from Katie. I used a 3/4" circle punch and punch out some fun turquoise paper. I then cut the circles in half and made photo corners. Also using another punch...one of the smaller hole punches, I punched out some little yellow circles. I put numbers on each one and then in my journaling block, wrote who was each there at the table. Ya know, for future references!! So there won't be any, who was that kid sitting next to Mike, or whatever!! I also did the same with the food pic. For my journaling, I used one of the CTMH journaling line stamps, so I had even lines. If I don't do something, my words get quite slanted. I used my QK turkey die and pieced him together, so he had fun feathers. I glued him down to a piece of Fancy Pants chipboard that I sprayed some Latte colored Glimmer Mist on. Then went over it all with Mod Podge, to make him all shiny. The title was done using my CTMH "Friendship" alphabet. The numbers were the small version of the same stamp.
Posted by Ashley at 10:12 PM 2 comments: 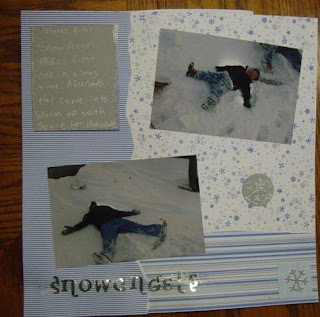 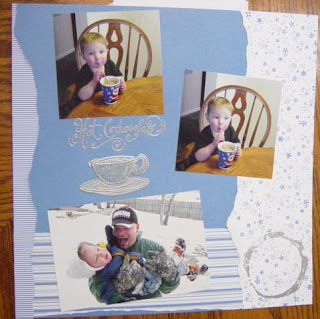 For this LO, I used Doodlebug papers. I stamped the images and then embossed them in silver. I used 2 different CTMH stamp sets. I love the cup stain one!! I inked the edges of my journaling block and embossed that also. The title was done using my new QK Snow Day font. I also made some use for those little squares and circles everyone bought at one point. I used my stamping foam from QK to make the snowflake from a QK die. Then I was trying to be creative with the Stickles. I made a snow angel image on the circle. I also used the Stickles behind the title.
Posted by Ashley at 1:07 PM 1 comment: 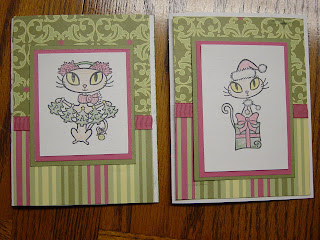 Yea!!! I got Pink Cat Studio Stamps!!! They are soo cute. I got them right before Christmas. So I had to make the Tramps each one!! I used CTMH papers and ribbon. The paper kit had greens and Hollyhock, my fave CTMH color!! I also used some white flock from Doodlebug on the right card. Went great on the Santa hat and scarf. Doesn't show up well, but it is there.
Posted by Ashley at 12:33 PM 2 comments:

Ashley
I have been scrapbooking since around 1991 when I was a 5th grader. Not to fancy stuff back then. I do it to remember all the little things, as well as the BIG things. I was in the Army for a few years. Met my husband. We have 2 kids, one boy who is 10 and a daughter who is 12. They are usually my main subjects.